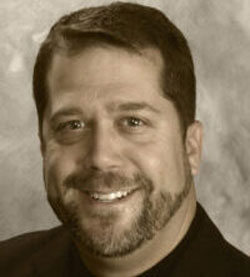 Eric Gignac is a graphic artist, concept illustrator, and graphic novelist as the director of visual communication for the Heinlein Prize Trust. Eric oversees the sales of “the Virginia Edition,” a collection of the complete works of Robert A. Heinlein. Eric has also completed several graphic adaptations of Heinlein to introduce the Heinlein Universe to a younger generation. Titles include Citizen of the Galaxy and Have Space Suit Will Travel with future adaptations of “the Star Beast” and “Life-Line” currently in production.

Eric’s illustrations have been featured in publications worldwide, and his work on ‘Red Chile Moon’ received high praise from the Washington Post Writers’ Group. His other notable works include a commission by the Queen of England to design a series of stamps for the Isle of Man and his design work on several NASA mission patches for the Space Shuttle and International Space Station.