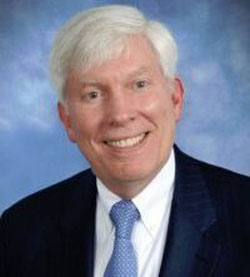 Dr. George C. Nield served as the Associate Administrator for Commercial Space Transportation at the Federal Aviation Administration (FAA) from 2008-2018. He has over 30 years of aerospace experience with the Air Force, at NASA, and in private industry. Prior to joining the FAA, Dr. Nield served as Senior Scientist for the Advanced Programs Group at the Orbital Sciences Corporation. His previous assignments include working as an Astronautical Engineer at the Space and Missile Systems Organization, a Flight Test Engineer at the Air Force Flight Test Center, and an Assistant Professor and Research Director at the USAF Academy. He was the Manager of the Flight Integration Office for the Space Shuttle Program at the NASA Johnson Space Center, and later worked on both the Shuttle/Mir Program and the International Space Station Program. He is a member of the Aerospace Safety Advisory Panel, which provides support and advice to the NASA Administrator. A graduate of the United States Air Force Academy, he holds an M.S. and Ph.D. in Aeronautics and Astronautics from Stanford University, and an MBA from George Washington University. He is also a Flight Test Engineering graduate of the USAF Test Pilot School. Dr. Nield is a registered Professional Engineer and a Fellow of the American Institute of Aeronautics and Astronautics.