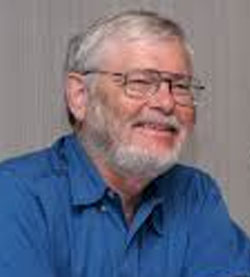 Gregory Benford — physicist, educator, author — was born in Mobile, Alabama, on January 30, 1941. In 1963, he received a B.S. from the University of Oklahoma, and then attended the University of California, San Diego, where he received his Ph.D. in 1967. He spent the next four years at Lawrence (Calif.) Radiation Laboratory as both a postdoctoral fellow and research physicist.

Benford is a professor of physics at the University of California, Irvine, where he has been a faculty member since 1971. Benford conducts research in plasma turbulence theory and experiment, and in astrophysics. He has published well over a hundred papers in fields of physics from condensed matter, particle physics, plasmas and mathematical physics, and several in biological conservation.

He is a Woodrow Wilson Fellow and a Visiting Fellow at Cambridge University, and has served as an advisor to the Department of Energy, NASA and the White House Council on Space Policy. In 1995 he received the Lord Foundation Award for contributions to science and the public comprehension of it.

In 1989 Benford was host and scriptwriter for the television series A Galactic Odyssey, which described modern physics and astronomy from the perspective of the evolution of the galaxy. The eight-part series was produced for an international audience by Japan National Broadcasting.

Benford is the author of over twenty novels, including Jupiter Project, Artifact, Against Infinity, Eater, and Timescape. A two-time winner of the Nebula Award, Benford has also won the John W. Campbell Award, the Australian Ditmar Award, the 1995 Lord Foundation Award for achievement in the sciences, and the 1990 United Nations Medal in Literature.

Many of his best known novels are part of a six-novel sequence beginning in the near future with In the Ocean of Night, and continuing on with Across the Sea of Suns. The series then leaps to the far future, at the center of our galaxy, where a desperate human drama unfolds, beginning with Great Sky River, and proceeding through Tides of Light, Furious Gulf, and concluding with Sailing Bright Eternity. At the series’ end the links to the earlier novels emerge, revealing a single unfolding tapestry against an immense background.

His television credits, in addition to the series A Galactic Odyssey, include Japan 2000. He has served as scientific consultant to the NHK Network and for Star Trek: The Next Generation.