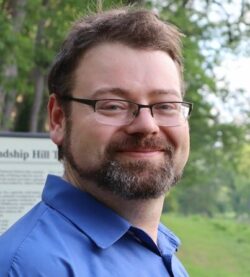 Isaac Arthur is the creator of Science & Futurism with Isaac Arthur, a science education and entertainment show with half a million subscribers and 250 episodes, that covers a wide range of futuristic concepts including Space Technology & Exploration, Colonization, Terraforming, Interstellar Travel, Megastructure Engineering, Cybernetics, Transhumanism, Artificial Intelligence, the Fermi Paradox, Aliens, Post-Scarcity Economies, and many more. He is also a regular guest on variety of news and entertainment shows discussing these topics from online productions to national radio. Isaac is from Ohio and attended Kent State University for Physics, graduating top of his class at age 20, and remaining on for grad school before serving in the United States Army. He is a veteran of the War in Iraq. After the military he returned home, and when not working on his show, he serves under the Secretary of State on the Board of Elections for his region of Ohio. Isaac also got married a few weeks back, and his wife Sarah serves on the State Board of Education for Ohio where she was re-elected to her third term and is currently running for the State Legislature.