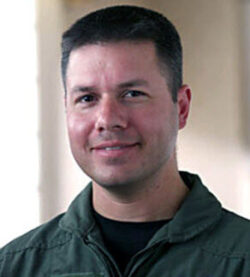 Lt Col Peter Garretson, USAF, is a former member of the NSS Board of Directors. He came into contact with the space advocacy community while serving as the Chief of Future Technology Branch for the headquarters of the Air Force. In that context he reviewed the most promising and far-term concepts, and participated in forums like the commercial Space Resources Round Table, the AIAA Space Colonization and Space Resources Technical Community, and the National Defense University’s Space Power Theory study. That exposure led him to formulate a vision and national grand strategy for space development which could only be described as O’Neilian.

Lt Col Garretson brought the concept of Space Solar Power to the Department of Defense. He was one of the shepherds and principal authors of the Department of Defense report, Space-Based Solar Power As an Opportunity for Strategic Security, which catalyzed the partnership of several space advocacy groups to form the Space Solar Alliance for Future Energy (SSAFE). He is also the creator of the NSS Planetary Defense Library.

He writes: “At the top of my agenda is survival of humanity’s first outpost, Earth: ensuring that our nation’s responsible entities are properly assigned and begin work on defense against asteroids and comets. This would simultaneously give us the capability to survey and exploit their resources and enable development of the tremendous economic and security opportunities, including Space-Based Solar Power which promises a way to heal our planet and lift many out of poverty with clean, renewable solar energy.”