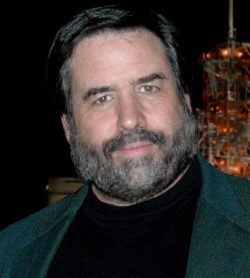 Rod Pyle is an author, journalist, television producer, and Editor-in-Chief of Ad Astra magazine. He has written 17 books on space history, exploration and development, including “Space 2.0,” “Innovation the NASA Way,” and “Destination Mars,” and writes for space-related periodicals including Popular Science, Space.com, LiveScience and “Sky at Night.” Pyle co-authored the “Apollo Leadership Experience” for NASA’s Johnson Space Center. He has produced, directed and written for The History Channel, Discovery and National Geographic TV, and is the host of iHeart’s “Cool Space News” podcast. Pyle is a frequent guest on national radio and television on space-related topics. Earlier in his career, Pyle produced television commercials, educational films, and was a visual effects coordinator on “Star Trek: Deep Space Nine” and the reboot of “Battlestar Galactica.” He holds a degree in filmmaking from the Art Center College of Design and a Masters of Arts in communication research from Stanford University.